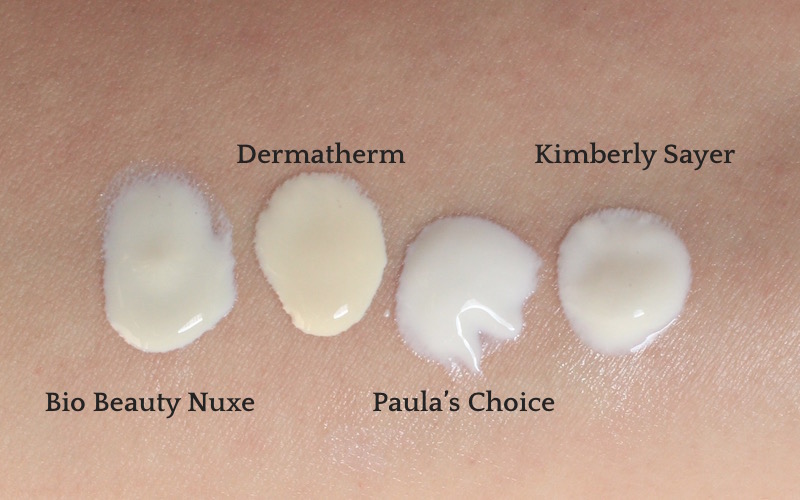 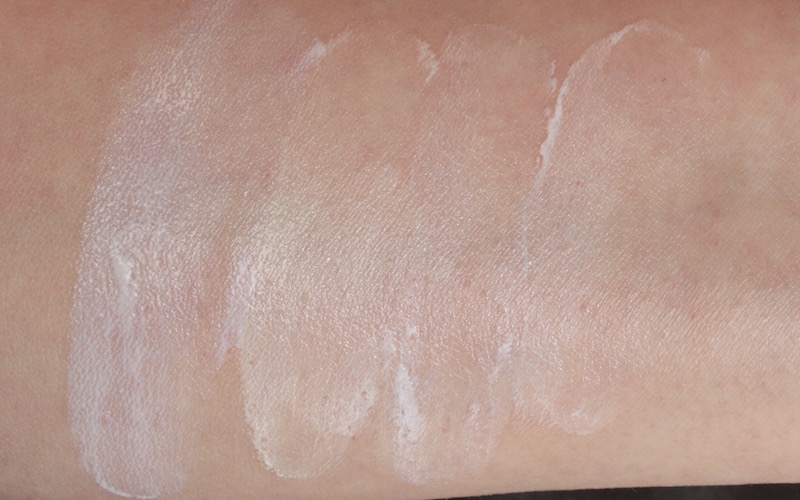 The Dermatherm Pursun Creme Solaire exemplifies the improvement of the textures of minerals sunscreens in the past few years. The typical white cast is no longer a problem and how the cream feels on your skin has also got better. Dermatherm is a French brand offering organic cosmetics that’s packaged in very good containers (airless dispensers) and is preserved with the relatively new UHT technique. UHT means that the products are heated with steam for 1-2 seconds and then cooled. Thus, germs are eliminated, but the effectiveness of the active ingredients isn’t weakened considerably.

I used two very good products by Dermatherm a couple of month ago. I liked them very much, so I definitely wanted to try their mineral sunscreen. It paid off. Unfortunately, I can’t just travel to France spontaneously, so I ordered the cream online at beautyshop.fr. Other online shops carrying Dermatherm are Mademoiselle-Bio, Cocooncenter or Farmaline. The big bottle of sunscreen contains 150ml and costs about 23 euros. That makes it cheaper than, say, Kimberly Sayer, Eco Cosmetics or Melvita.

When dispensed, the consistency of the cream is not particularly thick, but it is also not a light lotion. At first I thought: „Oh dear, another one of those sunscreens that feel heavy on the skin.“ But I was wrong. When you apply the Dermatherm Pursun sunscreen, it looks slightly shiny for an instant. That goes away once you rub it in, though.

After about half a minute, the cream even gets a lovely satiny look. I have dry skin,  though, and can only speak for myself. My first impression of the cream’s consistency was wrong, it feels lovely on the skin. It’s great for the winter, because it also feels like it protects the skin.

In the photo, the Dermatherm Pursun SPF 30 is the second one from the left next to the Bio Beauté by Nuxe SPF 50, which has a similar creaminess. On the right is the mineral sunscreen Hydralight SPF 30 by Paula’s Choice and the right-most is the Kimberly Sayer Ultra Light Moisturizer SPF 30. The creams increase in lightness from left to right, meaning that the sunscreen on the far left is thicker than the one on the far right. All of them contain titanium dioxide and zinc oxide as their sunscreen actives.

As for the white cast, it is strongest when you apply Bio Beauté by Nuxe and lightest when it comes to the other three creams. The Paula’s Choice one however contains nano titanium dioxide and nano zinc oxide, so the UV protection particles don’t show up on the skin as much. Upon application, the Dermatherm Pursun leaves a little bit of a white cast that goes away soon afterwards. When I use a lot of the sunscreen in the morning, though, it may be that I’ll see tiny white specks in my expression lines at the end of the day.

Ingredient lists usually start with water or oil, this one starts with orange extract. Honesty, no idea why. The extracts can usually be found in the second half of the list and not on the very top. Second on the list is the UV filter zinc oxide, which means that a lot of it is contained. After that you’ll see several ingredients that have an emollient effect and 7th on the list is the second UV filter, titanium dioxide.  Dermatherm never use perfume in the products, that goes for this cream, too.

The level of UVA protection is specifically stated on the packaging, that is not always the case. In the circle with the UVA label, which is used on European sunscreens, you’ll additionally find the number 16. That’s rather high. PA+++, which is the label used on high UVA protection sunscreens in Japan, indicates a factor above 8.

I like that the Dermatherm Pursun sunscreen only looks white on your skin for no more than seconds and then becomes transparent. It does not leave a greasy shine and does not feel uncomfortable on my dry skin. The airless dispenser provides optimal protection for the ingredients and is also very practical. I find 23 euros for 150ml of organic sunscreen perfectly fine. The cream provides very good mineral broad-spectrum sun protection and does not contain alcohol. You can’t say that about a lot of mineral sunscreen, so I’m glad I found this one.